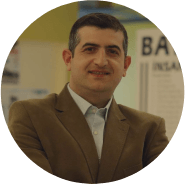 Additionally, Haluk was one of the founders and a chairman of the board of Turkey’s Aerospace and Defense Cooperative (SAHA Istanbul), which includes over 600 companies.

Haluk Bayraktar took an active role in the private sector in the fight against the COVID-19 epidemic that started in 2019 in Turkey. With the SAHA Istanbul Cluster Association, where he remained the Chairman of the Board of Directors, he led the execution of various projects and also took part in domestic intensive care ventilator projects developed by Baykar, Aselsan, Biosys, and Arçelik. Intensive care respirators produced in domestic and national facilities were delivered to the Ministry of Health in as little as a month. Turkey exported these devices to the countries in need, and they donated them to those that did not have enough funds.

The Ukrainian government awarded Haluk Bayraktar the State Medal for contribution to the strategic level of relations between Turkey and Ukraine. The medal was presented by the President of Ukraine, Volodimir Zelenski at the Presidential Palace in the capital city Kyiv on August 25, 2020.

Haluk Bayraktar has been awarded the Karabakh Order of the Republic of Azerbaijan for the contribution to Bayraktar TB2 UAVs, developed by Baykar in national and original form, in the liberation of Karabakh from the Armenian occupation.

Haluk is a graduate of Middle East Technical University in Industrial Engineering and Columbia University in Financial Engineering. He is an avid fisher, frequently appears on Turkish television and at university conferences, but above all he enjoys spending quality time with his wife and three children.